A Perilous Flight From Afghanistan Skillfully Staged in Manhattan

An aura of mystery surrounds Flight. It begins with the quiet, wood-paneled elevator inside the McKittrick Hotel that transports audience members to a room resembling a narrow train car. As they are instructed to wait, without further explanation, the small seats and dim lamps of the room enhance the inscrutable atmosphere.

Black-clothed attendants arrive to usher guests into another dark, windowless waiting area, where two golden-hued, taxidermied birds hang from the ceiling. One by one, each person is then escorted to yet another shadowy room and told to sit at a dark booth and put on a large set of headphones. This is when Flight finally takes off. 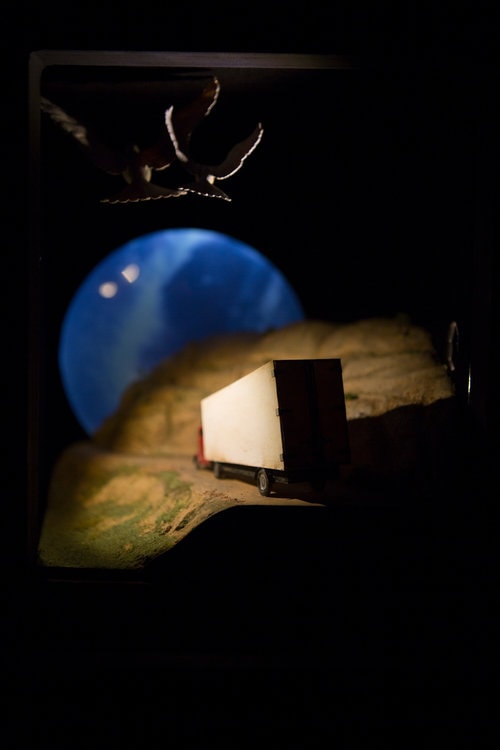 It starts with a disembodied voice asking, “What do you take with you when you know you are never coming home?” The audience then meets Aryan and Kabir, two Afghan child refugees fleeing from their home.

Flight chronicles their perilous journey across Europe via a series of dioramas built into a moving carousel; a voiceover narration played through the headphones accompanies the shifting scenes.

Kabir (voiced by Nalini Chetty) is perhaps eight years old, and his older brother Aryan (Farshid Rokey) is barely a teenager. Despite Aryan’s youth, he acts as guide, protector, and father figure to Kabir as they cross country after country on foot. 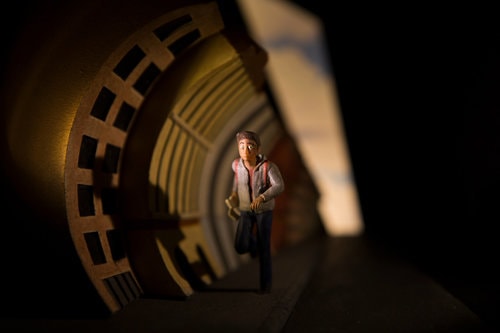 They are heading to England, where they hope to find a school that will take them. The boys frequently repeat the mapped-out plan for their journey, the city names evolving into a desperately hopeful motivational chant:“Kabul, Tehran, Istanbul, Athens, Rome, Paris, London!”

Unlike the shared experience of watching live theater, the viewing of Flight is individualized. Spectators are separated from each other by partitions that wall off each booth. While Flight is undoubtedly an accomplished piece of art, it cannot be comfortably described as a theatrical work. “Installation art” might be more appropriate.

In their narration, Aryan and Kabir describe how their journey takes its toll on them. Kabir laments in a rapidly increasing tempo the monotony of traveling on foot: “It’s the same the next day and the day after that.” Questions of familial background and national identity are also raised, as when Kabir asks Aryan, “Am I Afghan? I don’t know. Maybe I’m not anything anymore.” 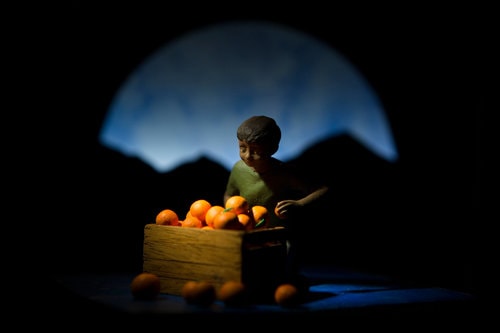 The orphaned brothers “dream of flight,” but they are so burdened and challenged on their journey, it is hard for them to soar. They are tricked into indentured servitude on a farm, assaulted sexually by an employer, and hidden in the backs of trucks and vans to avoid targeting by racist law enforcement. The beauty of the visuals is offset by the spectacle of the boys’ grueling experiences.

Since there are no live perfomances in Flight, the production’s impact rests heavily on the dioramas. Designed by Jamie Harrison and Rebecca Hamilton and dramatically lit by Simon Wilkinson, they create an atmosphere that is simultaneously dream-like and realistic.

Enhanced by Mark Melville’s sound design, each moment of Flight is rendered with impressive detail. A scene that depicts a group of choir students taking the boys under their wing and giving them clothes and food, after years of weary travel, offers some heartwarming respite. 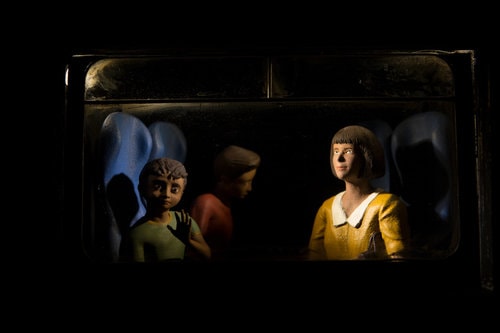 The metaphor of flight is frequently referred to throughout the show, with various forms of birds representing both freedom and constraint. A group of seagulls, acting as policemen who target the young brothers, is especially unsettling to watch. The birds’ wings are beautiful in terms of nature but are alarming when seen clutching a weapon or draped over a young boy’s hands.

Flight can sound dull when contrasted with the kind of live entertainment that prompts overstimulated viewers to tweet mid-performance. But the simple production clearly and powerfully communicates the truth of the boys’ journey, both physical and emotional.Flight continues through April 8 at McKittrick Hotel, 530 West 27th Street, New York, NY 10001. Tel: (212) 904-1883. Get tickets here.