How to Transcend a Happy Marriage

Are we just animals? Or are we a different species altogether, one compromised by our animal instincts? That’s one of the questions Sarah Ruhl raises in her ambitious drawing-room comedy How to Transcend a Happy Marriage.

As directed by Rebecca Taichman for Lincoln Center’s Mitzi E. Newhouse Theater, the play is a subversive examination of monogamy and lust that blends realism and magical realism.

Two long-married New Jersey couples – George (Marisa Tomei) and Paul (Omar Metwally), Jane (Robin Weigert) and Michael (Brian Hutchison) – are first seen enjoying a leisurely evening of food and drink and conversation about polyamory. Jane animatedly describes Pip, a temp at her office who lives with two male lovers and eats only meat she hunted and killed herself. The idea of Pip fascinates the quartet as they repeatedly project their own desires onto her. They decide to invite her and her partners to dinner on New Year’s Eve. 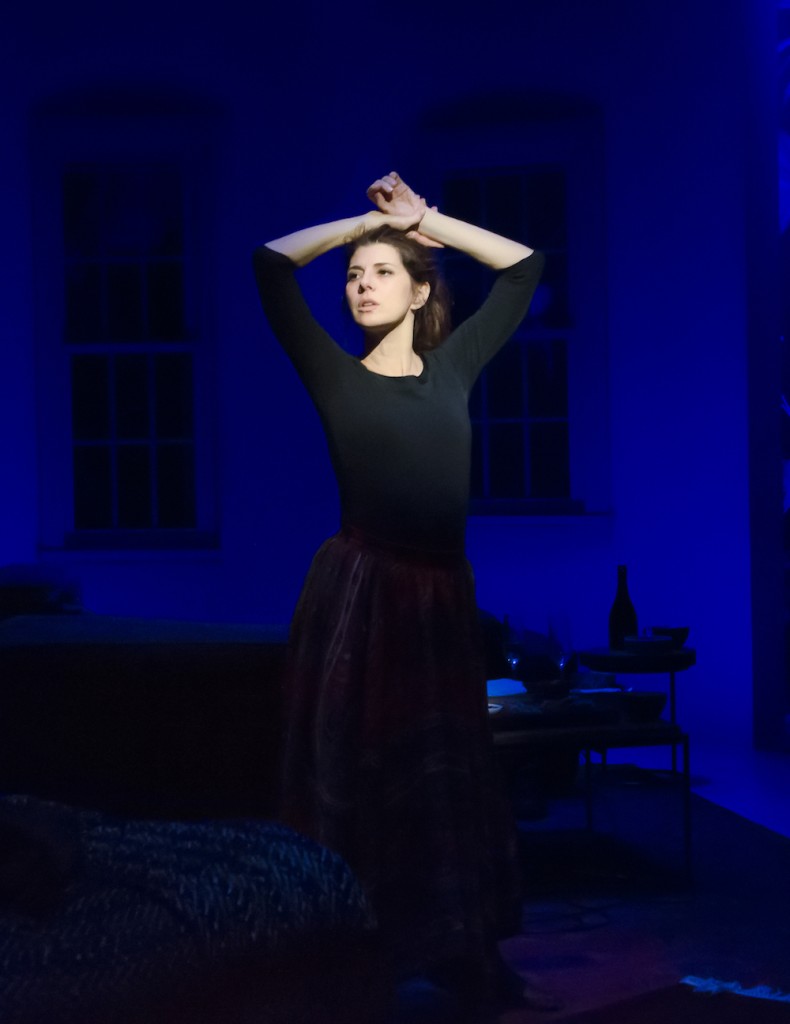 Played by Lena Hall, a Tony-winner for her stunning performance in Hedwig and the Angry Inch, Pip brims with sensuality. She meets and exceeds the two couples’ expectations, whether she’s cuddling with either or both of her lovers, describing the epiphany that led her to move from vegetarianism to the ethical slaughtering of animals, or singing a sexually charged rendition of “She’ll Be Coming ‘Round the Mountain” to her rapt audience.

Pip and her lovers bring a novel charge to the hyper-articulate quartet’s overscheduled lives. Even finding a date they could invite Pip and her lovers to dinner was a challenge given their professional commitments and their children’s extracurricular activities. These are the kind of friends who ask each other, “Have you been reading The Bacchae again?” and apologetically mention they used recycled paper towels when cleaning their kitchens.

None of them saw what was coming when they sat down to an evening with Pip, Freddie (David McElwee), and David (pronounced Dah-veed and played by Austin Smith). Out of place in this tastefuily appointed living room, the three happily defy conventions, whether declaring they don’t “believe in nationality” or extolling the unexplored virtues ofPythagoras.

Following a disastrous hunting trip, Pip and George find themselves in prison. George unleashes a monologue of maternal frustration, describing herself as a spigot or a drain, depending on what her husband and children need from her. She registers the exhaustion of living in an America where children aren’t valued and mothers aren’t helped, though people rejoice in the health and safety of England’s Prince William and Princess Charlotte. Tomei becomes increasingly moving as George’s darker emotions surface. 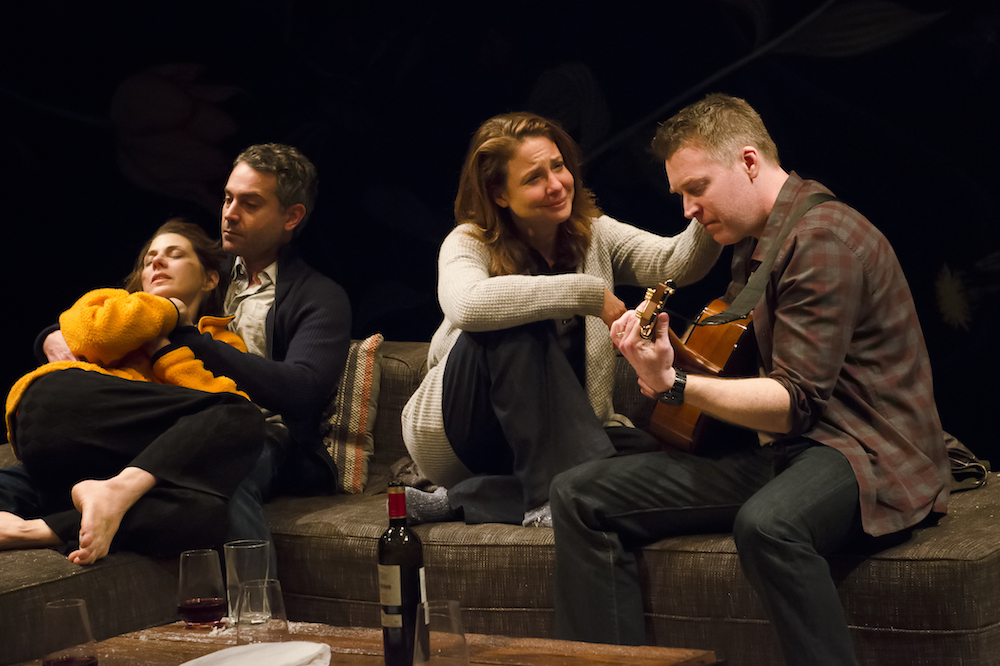 The themes of maternal fulfillment and frustration are only brought up at one other moment in the play. When Jane confronts her daughter, she screams about the hypocrisy of mothers needing to be sexual to give birth but then having to shelve their physical desires to care for their families. This could be the fount of another play, but Ruhl’s script quickly moves on to question if monogamy is satisfying and if marriages should be opened to other people.

Tomei and Metwally are perfectly matched as the comfortably married George and Paul, though George’s constant questioning make the less complicated Paul’s role seem underwritten. Tomei renders whimsical George’s hyper-academic analysis of life and love. Other husbands might be tempted to patronize her or roll her eyes when she’s in full flow, but Paul’s devotion to her forbids it. Their ability to be vulnerable with each other, especially in the final scene, is admirable.

Weigert and Hutchison give solid performances as Jane and Michael. At one point, Michael pulls out a guitar and plays a song he wrote for George and Paul’s tenth anniversary – his willingness to explore the friendship’s boundaries is compelling. Norvind is given little time onstage, but she clearly communicates her disgust with her parents, as well as her adolescent confusion.

Ruhl might have better focused the play by cutting back on the magical realism, which, for example, allows Pip to disappear mysteriously from prison. The script might also have probed more deeply the issues concerning personal and sexual identities, as well that of domestic comfort versus survival in the human wilderness. But in this play, as in marriage or any other restrictive experience, one can’t expect to have everything.