Molly Ringwald on the “Mystery” of Hollywood’s Gender Inequality 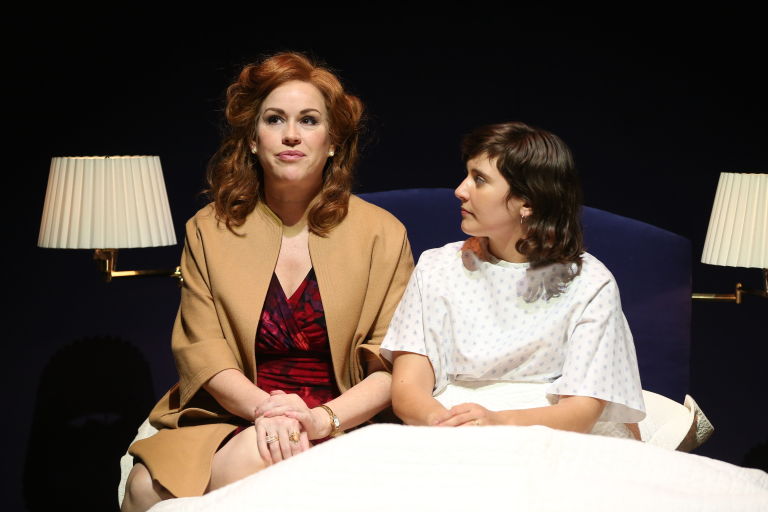 For more than 30 years, Molly Ringwald has been a beacon for teens everywhere, thanks to her endearing and relatable adolescent characters in 16 Candles and The Breakfast Club. These movies—and her inclusion in the group of young stars in the 1980s known as the Brat Pack—easily cemented her star status.

Now, Ringwald is taking on another iconic role: Aurora Greenway in Terms of Endearment, which opens tonight at the 59E59 Theaters in New York.

When asked about taking on the matriarch after her years as a beloved teen figure, she immediately responds, “Where are the sexy aunt characters in between?” Ringwald, who has been working steadily since making her screen debut in the family sitcom Diff’rent Strokes, was initially surprised when her manager approached her about playing the infamously overbearing mother. “We really do put women in these iconic places—the ingénue, the mom, then they’re the grandma, then they’re the wizened old crone,” she continues. At 48, the thought of taking on the role of a grandmother gave her pause. But Aurora’s story, which encompasses many years, a great deal of love and loss, and the opportunities that come with it, won out in the end.

Adapted from both Larry McMurtry’s book and the 1983 movie, Dan Gordon‘s play follows Aurora and her daughter Emma as they face love, heartbreak, and illness. Shirley MacLaine starred as Greenway in the film, winning an Academy Award for her performance as the highly opinionated, incessantly meddling matriarch.

In person, Ringwald couldn’t seem more different from her character. Thoughtful and soft-spoken, she calmly discusses the play over coffee, her trademark red hair set off by a bright green sweater and matching Starbucks cup.

Playing against type is nothing new to Ringwald, who had initially hoped for the role of Allison, the quiet outcast, in The Breakfast Club, before being cast as the wealthy and popular Claire Standish. But Aurora is an unabashed narcissist. The night before Emma’s wedding, Aurora tells her that she’s making “a mistake of such gigantic proportions that it will ruin your life.” And when Emma tells her she is pregnant, rather than be happy for her daughter, Aurora’s first reaction is to become upset about being a grandmother, wondering what man will want her now.

“It’s a little bit hard,” Ringwald says of portraying such a self-centered character, adding that she can hear the audience gasp after she delivers certain lines. “It’s challenging sometimes, because you think, ‘I want her to be understood or liked.’ But that’s who she is, and that’s part of her journey—watching someone who is completely narcissistic and self-involved no longer be that.”

But Aurora’s human vulnerability unfurls as she initiates a romance with her next door neighbor, a cavalier astronaut who helps her learn late in life that sex can be “fan-fucking-tastic.” “She is changed entirely from when you first meet her [at] the end,” Ringwald says. “Her ideas about being a woman change. And it is fun to play—she says things and does things that I would never think of saying or doing in my life.”

Sexuality is an essential aspect of Terms of Endearment, and Ringwald has embraced the opportunity to portray regular romance on stage.”Any time there’s a theme that’s dealing with sexuality or sensuality, it’s always a girl, basically,” she says. “Very often it’s a girl with an older man, and that’s the sort of model that we’re putting out there. And I don’t feel like it really represents who we are as a culture.”

Playing a maternal character certainly has its appeal for Ringwald, since being a mother is such a big part of her own life. “It’s interesting to me—how to be a mother, a good mother, and how to retain your own sense of self and identity outside of your children, and your sense of sensuality and sexuality. And how does one express that past a certain age where it’s deemed appropriate?”

Approaching Terms of Endearment from the perspective of a mother gives the story a different angle for Ringwald, who first watched the movie as a teenager and “completely related” to it. “I have a very strong relationship with my mother, but there have been times in our lives when it’s been rocky and we didn’t always see things the same way.”

The relationship between Aurora and Emma can definitely be described as rocky, especially when Emma is diagnosed with cancer. To access Aurora’s grief, Ringwald drew from her recent experience of supporting her husband through the losses of both his parents, as well as deaths within her immediate family: “I think once you lose someone close to you, it’s not like you go through the grieving process and it just ends. You can go forward and you can go back. It’s not linear.”

Over her career, Ringwald has watched Hollywood power dynamics change, both on-screen and off-screen. But despite having played many complex, era-defining characters, Ringwald observes that Hollywood’s lack of gender parity has managed to endure.

“I really do feel that we’ve made so many strides in terms of how we see ourselves and how we’re seen as women, but that Hollywood hasn’t really kept up with it,” she explains. “We’re not in sync. Women aren’t being represented in the way we should be.”

“It’s sort of a mystery to me,” she continues. “There aren’t as many women in positions of power in Hollywood as there need to be…I’m not saying that superhero movies shouldn’t exist. I just feel like there needs to be more well-rounded representation artistically, for men and for women.”